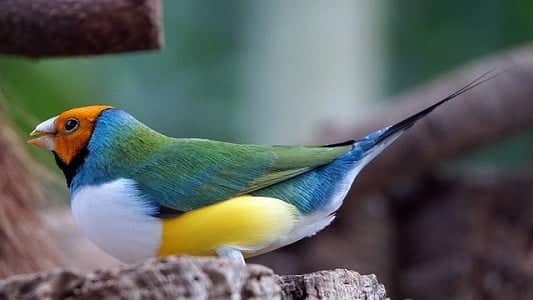 In addition to lungs, birds have nine air sacs that help them breathe. An internal parasite known as air sac mite (Sternostoma tracheacolum) can settle in the air sacs but also in the trachea, bronchi, and lungs and cause breathing difficulties in birds. Air sac mites are common in Australian finches such as the Gouldian finch, and they are sometimes seen in canaries and occasionally in parrots.

Air sac mites don’t infect your bird out of the blue. So, there is no reason to suspect their involvement in distressing your bird respiratory system unless you have recently introduced or purchased a new domestic or wild bird that carries them.

Air sac mites transmit from one bird to another through sneezing and coughing, or by food and water contaminated with feces containing egg mites. During the breeding season, air sac mites are transmitted to chicks by the parents through feeding. Since they are contagious, infected birds should be immediately isolated from healthy ones.

Signs of infection include:

Diagnosing air sac mites is problematic since most of the symptoms are similar to many pathogens that cause respiratory infection. The question is how do we differentiate air sac mites from other conditions.

I found the answer in the Handbook of Avian Medicine on page 177, the author says:

“Diagnosis of air sac mites can sometimes be made by transillumination of the trachea in live birds, with the mites visible as tiny black points in the trachea. The throat of the bird must be wetted (e.g. with alcohol) and the feathers parted. A post-mortem examination, however, is more reliable, and the condition is diagnosed by finding in the mites in the air sacs, the lungs, and/or the trachea. Airsacculitis, tracheitis, and focal pneumonia may be evident.”

If you decide to use transillumination, don’t hold the bird in your hand tightly and for long because it may lose its breath quickly and die in your hand. I personally recommend trying with a healthy bird first, in order to master the process before initiating the experiment on an infected bird.

The treatment is a single drop of ivermectin on the skin for small birds such as canaries and finches. The dose should be repeated for most birds after two weeks. You should consult your doctor before using any medications.