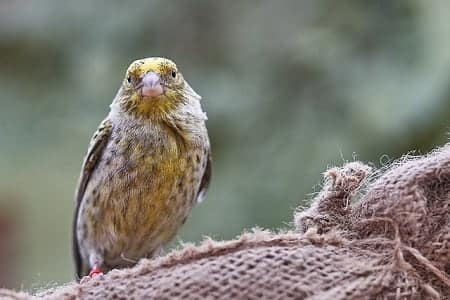 The canary life cycle begins with egg-laying and ends with reproduction. In this article, you will learn about the number of eggs canary females lay, length of incubation, fledgling and weaning, molting, maturity, and reproduction.

The breeding season has begun

Laying and incubation of eggs

The canary life cycle begins with laying fertilized eggs. The female lays one egg per day. She usually lays 3 to 4 eggs, but sometimes can lay five eggs and rarely six. Incubation usually starts after laying the first egg, but some females delay incubation until they lay the last egg.

After 13 to 14 days of incubation, the first egg hatches. Sometimes the egg hatches a day earlier at 12 days, and sometimes it hatches late after 15 days. A canary egg can hatch after 16 days of incubation, but this rarely happens. If all the eggs hatch on the same day, this means the female started incubating after she laid her last egg.

When the chicks reach a week old, feather pins start to emerge on their back and wings. When they reach 14 days old, the feathers cover all their body. Under normal conditions, the chicks fledge at 15 days, but sometimes they fledge later if they experience slow growth due to poor diet or bad parenting. Other times the cold weather discourages them from leaving the nest on time. After all, the nest gives the chicks warmth and comfort. What is their rush to leave it?

At 21 days of age, the chicks begin to rely on themselves. They try to peel the seeds, but they face difficulty because their beak is still soft and weak. Therefore, at this age, it is advised to add soft food such as egg food, hard-boiled eggs, and vegetables that are easy to peck. The mother continues to feed her chicks until they reach 28 days. At this age, the fledglings wean, and thus, they should be separated from their parents. Indeed, some wean earlier than others.

After the chicks fledge and wean, they become juveniles. At eight weeks old, they experience their first molt, which is called the juvenile molt. For the first time, they begin to replace their old feathers with a new set of new ones except for the tail and wings. Adult canaries replace all their feathers including tail and wings.

Learning to sing and reaching maturity

Juvenile canary males begin to warble or babble (practice their song) at a very young age, and they perfect their song at six months old. For more details read how long does it take for a canary chick to sing?

Often canaries reach maturity or the ability to reproduce at eight months old, but, regardless, they must wait until spring if they want to breed, assuming they live in a temperate climate and sleep at dusk and wake up at dawn. In spring, they reproduce, and the life cycle repeats again.