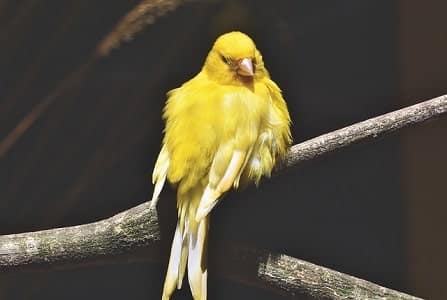 Molt is a natural physiological phenomenon that all birds including canaries must go through, but its duration and the time and frequency of its occurrence vary from one bird species to another. During molt, birds replace their old feathers with new ones without appearing bold.

When do canaries molt?

Canaries replace their feathers once a year immediately after the breeding season ends. In temperate climates, the canary breeding season begins in the spring in March, and it ends in the middle of summer in August with the commencement of molt.

Molt is mainly influenced by daylight, and daylight is linked to a physiological process that occurs inside the bird body. After daylight reaches its peak in late June, it starts to gradually decline in July, and this decline becomes more noticeable in August. This peak and a noticeable decline in daylight triggers molt in canaries.

That is why most canary birds molt in August, but some can molt in July, and others may defer until September. This depends on the geographical area in which the bird lives and many other factors.

Outside of season molt

Canaries could start the molting process prematurely, outside the normal and expected time. This may happen due to:

How long does it last?

Molt usually lasts from 6 to 8 weeks but may take sometimes 10 weeks and in rare instances 12 weeks. The length of molt depends on the individual bird, its diet, duration of breeding activity, and the environment in which it lives. Delay outside the usual parameters normally indicates a poor diet or improper room temperature.

Stress could also delay molt and worse yet decrease feather quality after completing it. So,  make sure you don’t add stress to an already stressful period for your bird. If your canary takes longer than 12 weeks to complete his molt, you need to consider corrective measures such as improving diet and adjusting light and room temperature.

If the bird enters the molt exhausted and overworked, his body will have trouble converting food to energy, and he may eventually die. Therefore, you shouldn’t let your birds raise more than the norm: three successful clutches.

If you want the bird to molt safely, naturally and effectively, you should:

Singing before during and after molting

Canaries don’t stop singing during breeding but they stop during molt because it takes a toll on their body energy. This is why your canary also appears sluggish and inactive most of the time in his cage. After finishing molt, your canary should gradually resume singing again.

However, some breeders complain that their canary stop singing after the molt ends, and the reason is mostly due to the poor nutrition that was provided to the bird during molt, and therefore, the bird finishes his molt weak and doesn’t have the energy to sing and, worse yet, the bird may get sick and die after several weeks.

The bird needs more proteins, minerals, and vitamins during molt. Among the most important foods that are presented at this stage are hard-boiled eggs or egg food. These food sources contain many minerals and vitamins and a good percentage of the proteins that a bird needs to grow its feather which contains 88% protein.

The most important source for obtaining a good amount of minerals and vitamins is seeds germination. Germinated seeds have much higher nutritional value than normal editable seeds. Another great source of vitamin and minerals is dark leafy and non-leafy vegetables such as carrots, hot and sweet peppers, watercress, spinach, radish leaves, and sweet potato.