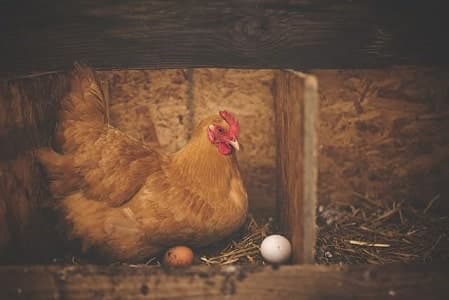 Egg binding occurs when the female is unable to eject the egg from her reproductive tract. It often occurs in finches, canaries, budgies, lovebirds, and cockatiels and less so in chickens and pigeons.

The breeder should observe the following symptoms depending on the individual bird and the stage of condition:

You should be able to feel the presence of the egg and the hardness of its shell by gently pressing on the abdominal. However, more often than not, females suffering from egg binding develop a soft egg without a shell, and when you press on the abdominal, you won’t be able to confirm whether an egg is stuck inside or not. Therefore, an x-ray might become necessary in some cases for diagnosis.

Note: a soft egg lacking an outer shell due to calcium deficiency causes egg binding because the contraction of muscles fails to force the soft egg out.

Lack of nutrients, mainly calcium, is the primary cause of egg binding. Therefore, it is essential to provide food that is not limited to seeds only in addition to offering nutritional supplements if necessary, before the female starts laying.

The importance of calcium lies in its role in strengthening the eggshell, and in contracting the muscles of the reproductive tract to help press the egg out. The body struggles to absorb calcium without vitamin D, so these two nutrients complement each other. Vitamin E increases fertility, and it also strengthens muscle function.

In addition, it is best to breed birds in relatively large cages. It is also advised not to bring females into condition until they are fully mature and develop their sexual organs.

Moreover, pet birds should not be allowed to reproduce throughout the year without a break because as females lay more eggs, the oviduct gets weakened, and therefore the chance of egg binding occurring increases. Finally, it is best practice to keep the birds in a flight cage after the end of the breeding season to get plenty of exercise.

Several things help the female press the egg out, the last and most dangerous of which is intervening by hand. Hand intervention is not recommended as it causes severe pain to the female, and it is discouraged, especially if the breeder has no former experience, and the egg cannot be seen near the end by the naked eye. Ideally, hand intervention should only be carried out by the veterinarian while the bird is under anesthesia.

If egg binding is detected early, there are many available options to treat the condition before intervening by hand or taking the female to the vet. First, try giving the female one drop of paraffin oil orally, and one drop inside the vent without forcing it in. Read more about paraffin oil here before you apply it internally.

If the female was unable to slide the egg after a few hours, then consider giving a supplement that contains calcium and vitamin D by applying five drops orally four times every 15 minutes. You can buy the same supplement prescribed for humans from the pharmacy. You should dilute the tablet with at least 2 liters of water depending on the size and type of bird. Consult your vet for proper conversions. After applying the drops, leave the solution in the drinking water as well.

Doing so should help the female lay her egg after two to three hours or perhaps the next morning. If she fails to do so, you should consult your vet. Egg binding is fatal if left untreated or if detected late.

The vet has more range of options than what is available to breeders; The vet can use E2 gel inside the vent, which helps in stimulating the contraction of muscles. He can also inject the bird with calcium and other nutrients, and he can intervene surgically as deemed necessary.

After getting the egg out, the vet might have to deal with other problems, such as cloacal prolapse and reproductive tract infections. It is always best to consult your veterinarian when dealing with health-related issues.