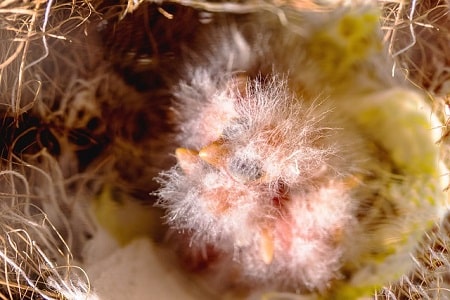 Canary chicks grow and develop with the proper care of their parents. The keeper also contributes to the growth and well being of the chicks by providing highly nutritional foods to their parents. As a canary breeder, you should buy a seed mixture that suits the breeding season and also invest in supplements, such as egg food or multi-vitamin. Germinated seeds provide superior nutritional value, and hence they are an excellent choice for breeding canaries and their offsprings. You should also offer hard-boiled eggs and some fruits and vegetables.

Now let’s discuss the growth stages of the canary chick from hatching until weaning under normal conditions.

The hatchling and nestling stage

After 13 or 14 days of incubations, the baby canary hatches weak and featherless. After one week, it opens its eyes to the world. Its pin feathers also start to emerge in the middle of its back and the edge of its wings. When it reaches two weeks old, its body becomes entirely covered with feathers.

At 15 days of age, the chick leaves the nest, but other chicks may not leave until they reach 17 days old, especially if the weather is cold or if they are not fed well. Once all the chicks leave the nest, they become juveniles. At 21 days, the juvenile tries to eat on its own but remains partially dependent on its parents for food until the age of 27 days.

At 28 days old, the juvenile weans and becomes independent. At this age, separating the juvenile from its parents is totally safe, and it should not remain with them any longer even if it still begs for food.

Provide the daily seed mixture for the newly weaned juvenile canary and add soft foods, such as hard-boiled eggs, during the first week of independence. Some juveniles will wean earlier than 28 days but not later unless they are underdeveloped and underfed.

The molting and immaturity stage

The canary will hold the juvenile title up until it enters his first molt – the juvenile molt. From this point on, it is called immature. The juvenile molt starts when the canary reaches 8 weeks old, and it lasts for up to 8 weeks. For more details, read the canary molt – all you need to know.

The adulthood and maturity stage

The canary continues to grow independently of its parents until it becomes mature and able to reproduce. It usually reaches sexual maturity at 8 months old. However, some canaries mature earlier at 6 months and others later at 10 months or older.

Watch the growth stages of these cute baby canaries on our youtube channel: