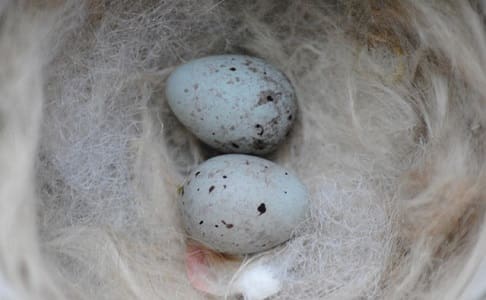 Canaries that live in temperate regions and sleep at sunset, and wake up at sunrise should generally start breeding around early March and stop naturally at the end of July. So that gives us a five months breeding interval from the beginning of March to the end of July.

Each round of laying eggs, incubating them, and raising chicks after hatching would require about a 50-day cycle ( from laying the first egg of the first clutch until laying the first egg of the following clutch). Since the breeding season lasts approximately five months, the female can only raise three successful broods in succession mathematically speaking (150 days breeding length / 50 days cycle for each round = 3).

So, If you let your bird mimic nature by letting it sleep at sunset and wake up at sunrise, you should expect your bird to lay three clutches of eggs per season if each clutch successfully hatches and if the female succeeds in raising the hatchling into fledglings. So rearing three successful clutches in succession the standard. Anything below is healthier, and anything higher is generally worse for the well-being of the bird. I say higher since some canaries may start breeding a bit earlier than March and may finish a bit later than July. In this case, your canary may lay up to four successful clutches and raise four successful broods, especially if the weather or room temperature cooperates.

So, contrary to what some canary breeders think, canaries don’t breed all year round naturally. However, canaries, like commercial laying chickens, can reproduce, artificially, all year long by controlling food, light, and temperature. But that way, the bird will breed to death.

Wild canaries lay three clutches and can raise up to 15 chicks during the breeding season. Similarly, captive canaries can also lay three clutches and rear a dozen chicks per season (Sigrun Rittrich-Dorenkamp, 1999). But some authors don’t recommend allowing females to raise more than two successful broods as more puts too much pressure on the female.

As females raise more chicks than they can handle, the chances of health deterioration increase, especially during molt. Once canaries finish breeding, they start molting or shedding their feathers to obtain a set of new ones. If the female manages to get out of the molt alive and healthy after an exhausting and prolonged breeding season, her ability to take care of hatchlings in the following breeding season decreases. Moreover, captive canaries cannot be equated with wild canaries as they don’t have access to the same available resources. Therefore, rearing 15 chicks per season may be no problem for wild canaries. But handling 15 chicks is way too many for the captive.

If you want to let the female rear three successful broods, that is your decision. Allowing three broods may be a good decision, and won’t necessarily have an impact on your bird’s health. However, you won’t find any expert encourage you to breed four successful clutches out of your canary females. So, if you care for your bird welling and want it to survive and thrive in the long run, it is better not to let it exceed three successful broods, or not let it rear more than ten chicks per season. If the male is not present with the female to help raise the young, I recommend no more than 8 chicks per female per season. Your decision should be based on the number of chicks reared, not on the number of clutches laid. After all, not all clutches succeed and laying eggs take less energy demand than rearing chicks.

Females may lay five fertilized eggs, and they may all successfully hatch each time. In this case, you may want to force your female to stop breeding after successfully rearing the second clutch. To force your birds to stop breeding, remove nest and nesting material, provide less food rich in protein, and stop offering supplements. If this doesn’t work, decrease daylight (birds should receive no more than 10 hours of daylight). This way, females will molt after they finish rearing their second brood, and therefore stops breeding on their own. Remember, raising more than 10 chicks may be detrimental to the health of your bird and may cause problems during molt, and if it doesn’t, the female may become less likely to raise chicks well in the following season.

So to answer the question, canaries could lay anywhere between 2 to 4 successful and consecutive clutches of eggs per season, and they may also be allowed to rear up to four consecutive broods, depending on the number of chicks they have already reared. If the couple is heading towards caring for more than 10 chicks, we may interfere and force them to stop through artificial manipulations, as mentioned. If the number of chicks falls within a reasonable range, we can let parents do their thing without interfering and let nature take its course.

If you want healthy parents and chicks, feed well throughout the breeding season. Check out the best fruits and vegetables you can offer to your birds. It is always best to let your bird follow the natural rhythm of daylight for optimal health. For more tips, check out 10 pieces of advice for the novice bird keeper.