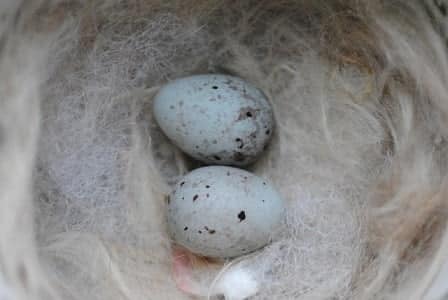 Most canaries lay eggs three times a year, whether in captivity or in the wild. In other words, canaries normally raise three broods during the breeding season and usually lay three to five eggs per clutch. So, there you have it! Not so fast, let me explain!

In temperate climates, such as most of Europe, most wild canaries start their breeding season in early March and end it in late July. Your captive canary is no different if it regularly sleeps at sunset and walks up at sunrise throughout the year.

So, if the canary starts breeding in March and ends in July, it reproduces then for about five months or 150 days. Within 150 days interval, the canary can only lay three times or raise three broods mathematically speaking because each clutch/brood takes about a 50-day cycle between laying and incubating eggs and raising chicks to independence (3 broods * 50-day cycle = 150 days = 5 months).

However, some wild and captive canaries may start the breeding season in February and end it in August, which may give them more room to raise a fourth brood, if the weather cooperates. But under normal and natural conditions, it is impossible for the canary to continue breeding, and hence laying the fifth brood. It is not considered healthy for your captive canary to raise four broods per year, let alone five! So, raising three broods is the norm, and raising four is not recommended, and raising more is a no-no.

Under artificial and controlled conditions, canaries can continually breed all year long until they exhaust themselves and eventually die. If you want your canary to stay healthy over the long term and avoid problems in the next breeding season, don’t allow it to lay eggs and raise chicks more than 3 times per year. If your canary exceeds three successful clutches in succession, you should force it to stop by removing nest and nesting material, and providing less food rich in protein, and cutting supplements. If this doesn’t work, you should reduce the number of daylight hours your bird receives.

I wrote another article on this subject for further details and more specific information:

I recommend reading When does the canary breeding season start and end?