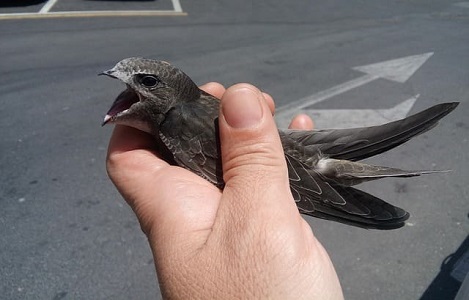 More than 100 species of swifts exist worldwide, 4 of which consider Palestine their temporary home. They include the pallid swift, little swift, and alpine swift, all of which belong to the order Apodiformes and the Apodidae family. But the most prevalent is the common swift, which arrives in Palestine and other neighboring countries in early spring to breed. By the end of summer, it begins its migration with its offspring to Africa, where the climate is warmer and food is plentiful.

With a speed that can reach more than 100 kilometers per hour, the swift is one of the fastest birds in the world. It spends most of its life in the air without touching the ground. It stays up to 10 consecutive months in the air in a given year, and it only lands inside its nest during the breeding season. The swift eats, drinks, mates, and even sleeps during flight. Its weak and short legs prevent it from perching or walking, and thus, if it lands on the ground, it will find it difficult, if not impossible, to take off.

According to estimates, one single swift can eat 5000 insects per day, and a single pair can collect 100 thousand insects to feed their young daily. Therefore, swifts are one of the most important birds that help in the biological control of insects. Swifts’ diet includes flies, mosquitoes, ants, bees, beetles, and wasps.

The breeding season of the common swift begins from March and extends until mid-June. It nests in the crevices of buildings or rocky cliffs. The female lays 2 to 4 eggs, and the couple rears 1 to 3 broods per season. The incubation period ranges from 19 to 20 days, and the chicks fledge after reaching five weeks or older from the date of hatching. Couples remain together throughout their lifespan and return with their offspring to the same nest or location they breed in every year.

Differences between swifts and swallows

Many people confuse swifts with swallows and even martins because they all look similar, and some of their behaviors also overlap. But in fact, there is no genetic link between them. The similarity is just a mere coincidence.

Here are some notable differences between swifts and swallows:

One of the major differences between the swallow and the swift is the ability to stand on the ground and perch on trees and wires. The swift could neither land on the ground nor perch on trees and wires because of its very short and weak legs, which enable it only to hang upright when entering its nest with its strong claws. The swallow can simply do both: land and perch. Swifts usually fly at high altitudes, while swallows fly low, chasing insects close to the ground.

Perhaps what also distinguishes the swift from the swallow is its thin, pointed, and arced wings. Swallows, on the other hand, have wider wings pointed at their tips. Swifts, unlike swallows, don’t flap their wings all the time during the flight. They instead use gliding to stay aloft in the air. But there are times when they flap their aerodynamic wings to accelerate and gain momentum.

In terms of colors, the swift generally has brown or dark gray colors on the body, while the swallow has ranges of colors, depending on the species: white on the belly, bluish-black on the back and wings, and orange or red on the face. Nesting sites also differ. The swift uses the crevices of buildings or rocky cliffs to nest in, while the swallow builds its nest out of hay and mud hung from the wall.