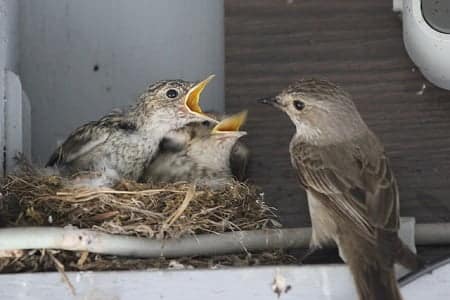 Chick death after hatching is a common problem that many exotic bird keepers face during the breeding season. The magnitude of this problem varies from one bird species to another and from breeder to another. Any breeder can mitigate chick losses by following basic breeding protocol:

In this article, I will outline five causes of chick mortality after hatching and provide the protocol to follow in order to prevent the occurrence of such causes.

One of the major causes of chick mortality is the spread of infectious diseases caused by pathogens such as bacteria and viruses. Diseases can either transmit horizontally from one bird to another or vertically from mother to eggs, and therefore to chicks after hatching. The chicks could also die in the egg before hatching.

Parents can transmit a disease horizontally through feeding, and thus chicks die due to their weakened immunity. There are many infectious diseases that can spread to birds. The prevalence of each disease depends on the bird species; the most common include:

And as “the golden” saying in medicine goes: “prevention is better than cure”. Therefore, to decrease the possibility of dealing with an infectious disease, you should among other things:

It is not all common for birds to abandon their eggs or young chicks. In some cases, however, some birds may do so at any stage of brooding due to stress. Therefore, make sure you place your birds in a safe and quiet room and avoid handling them by hand when they are rearing their young, especially if your bird selection is “difficult to breed”.

If the female successfully reared chicks in the previous breeding season and abandoned her young in the following season, you need to consider stress as a major cause. However, if the female abandons every brood in every season, genetics may play a role in this situation, and in this case, there is not much you can do.

Moreover, if you exhaust the female by allowing her to rear a lot of chicks during the breeding season, her ability to care for and feed chicks may decrease in the next breeding cycle.

Red mites (dermanyssus gallinae) hide in dark places during the day and appear at night in order to feed on the blood of birds. Its favorite spot is the nest because it is warm and close to its victim. If the infestation of mites is severe during the incubation of eggs, the female will abandon the nest.

Red mites can transmit diseases; if not, it can weaken chicks until they eventually die. You should inspect the nest for mites if chicks start dying. A small number of mites in the nest usually don’t cause major problems but it shouldn’t be ignored. You should apply an anti-mite powder in the nest to kill and expel the remaining mites. For more details, read: what are red mites and how to get rid of them?

Protocol to follow to avoid dealing with this problem:

If mites are presnet:

Poor diet causes females to become vulnerable to sickness, and chicks will begin to gradually die. During the breeding season, birds need a higher than normal level of protein, fats, and vitamins. For small songbirds such as canaries, which feed primarily on seeds, oily seeds should reach 50% of seed mixture. Oilseeds include but are not limited to flaxseed, niger, and hemp.

A balanced diet should not be limited to seeds but should also include fruit and vegetables. However, not all fruit and vegetables are safe to feed. So, make sure you avoid providing any toxic food for your pet bird. You can also provide hard-boiled eggs or buy egg food from your nearest pet shop. Egg food contains fats, proteins, and vitamins, and minerals.

5. Leaving the male with the female after hatching

Some males are very caring and will not disturb the female during the incubation of eggs and will help her feed the youngsters. But other sexually active males can cause stress and inconvenience to the female.

If the male doesn’t behave well around the female, separate him after the female completes laying her last egg and return him after the chicks start growing pins of feathers, at 6 days old in case of canaries.