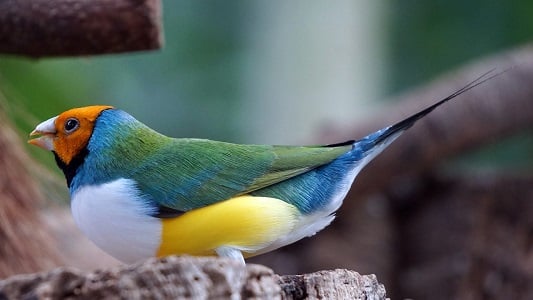 The Gouldian finch was discovered by the English ornithologist John Gould, who chose the name “Gouldian” for this bird in honor of his deceased wife, Elizabeth, and for this reason, it is also called the Lady Gouldian finch; other common names include the painted finch and rainbow finch. Gouldians are tropical birds native to northern Australia. They belong to the order of Passeriformes and the family of Estrildidae and they come in a variety of colors but all varieties belong to only one species (Erythrura gouldiae).

Because of their attractive and harmonious bright colors, wild Gouldians were trapped and sold for the aviary trade. In 1981, the Australian government banned the trade after the Gouldian population experienced a significant decline in the wild. The Gouldian finches have continued to decline despite the ban, and are still listed as endangered species to this day. The other factors that have accelerated and continued their decline include predation, the spread of disease, wildfire, climate change, infrastructure development, and human practices that employ the Gouldian habitat for raising livestock. The Australian Wildlife Conservancy and other national and international bodies are making an effort to increase the Gouldian population in the wild by installing nesting sites, managing wildfires, and protecting Gouldians’ habitat. The success of these efforts is yet to be seen.

In captivity, the Gouldian finch feeds on a wide variety of seeds, such as hemp, sunflower, niger, oats, canary seeds, flaxseeds, white and red millet, sesame, etc. In the wild, it also feeds on seeds, especially grass seeds, but it can also eat insects, such as termites, especially during the breeding season, as such food provides a good source of protein. On the other hand, hard-boiled eggs, egg food, and protein-rich seeds, such as sesame, niger, and flaxseed, are alternative sources of animal protein for the captive bird. However, if you insist on introducing insects, you can buy dry mealworms and offer them during the breeding season.

Gouldians belong to one species but they have many color variations, such as head color. The main head colors are red, black, and yellow. The blackhead is the most prevalent in the wild, followed by the redhead. The yellow head is considered rare in the wild but not as rare in captivity, and it still remains less common than the black and redhead in captive birds.

The head colors are not the only variable colors. Color varieties include the chest, back, and belly as well. Selective breeding, choosing pairs with desirable characteristics to pass onto their offspring, makes all these varieties possible. Some varieties include:

There are many ways to determine the sex of Gouldian finches; we uncover some of them below. First, Gouldians are sexually dimorphic, which means they have clear marks that help to distinguish males from females. Adult males with greenback and ready to breed have ivory or pinkish-beige beak, and the tip of the beak becomes red. On the other hand, females with a greenback and in breeding condition have dark gray-black or charcoal beaks. We can also tell the difference between males and females in Gouldians by the brightness and width of the blue ring around their neck. Females have a more dull and narrow blue ring around their neck, and sometimes it does not appear at all. Males in compression have a broader and brighter blue ring around the neck.

There are several health problems and infectious and other non-infectious diseases that transmit to Gouldians, the most common of which are: