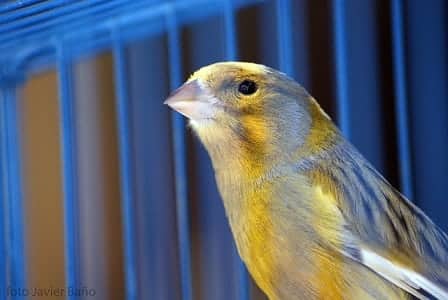 In a nutshell, if you want your canary to sing, it must be male, mature, healthy, well-fed, sleeping early, and out of molt. But let’s now explore each prerequisite in more details:

First, you need to make sure that your canary is male. A female canary can sing, but she has no incentive to do so. Males sing to mark and defend their territory, and deter their rivals, and attract females. They sing loud and hard, especially with the commencement of the breeding season.

Juvenile canary males cannot sing; they warble or babble, meaning they practice to sing. When they reach six months old, they usually master their song. At eight months, they usually mature, and with that, they sing a full song. As the breeding season approaches in spring, they sing loudly and hardly. For more information, read how long does it take for a male canary chick to start singing?

Don’t expect your canary to sing if he is sick or not well fed. Ill birds are also useless for breeding. A healthy male canary should sing loudly and frequently during the breeding season to attack males and deter rivals. Similarly, a prolonged poor diet will result in a sluggish bird and unhappy bird that will refuse to sing, and worse, he might fall sick. Make sure that food is not limited to seed only and offer fruits and vegetables and commercial supplements if necessary.

Sleep is essential to all beings. Your canary needs to sleep for at least eight hours. Don’t let your bird turns into a night owl like you. While you can sleep in during the day, your bird will wake up as soon as the light penetrates where he lives.

Sleeping eight hours or fewer leads to depression, lethargy, and feather problems, and all of this will discourage your canary from singing. A good practice is to let your bird sleep at dusk and wake up at dawn. Lack of sleep causes health problems, and as I have already said, unhealthy and ill birds will not sing.

Molting is a natural physiological phenomenon that your canary must undergo once a year in the middle of summer in August under normal and natural conditions.  Molting lasts for about eight weeks and wreaks havoc on the bird’s body. The bird is less active and has no energy to sing.

Thus, your canary stops singing as it molts. But if he is well fed and cared for, you should hear him singing while he molts, but you should expect his song to be short and mellow. He sings well again after the molt is over. For more information, read canary molt- all you need to know.

If your canary is an adult male and well-fed, not molting and sleeping early, it should sing. If it doesn’t, it may indicate that there is something wrong with the syrinx. The cause may be genetic in origin or maybe from a previous repository disease. Some birds may sing loudly and continuously to the point where they inflame their vocal cords. In this case, you should add some honey in drinking water and place the bird in a quiet room away from other birds and tint his cage.